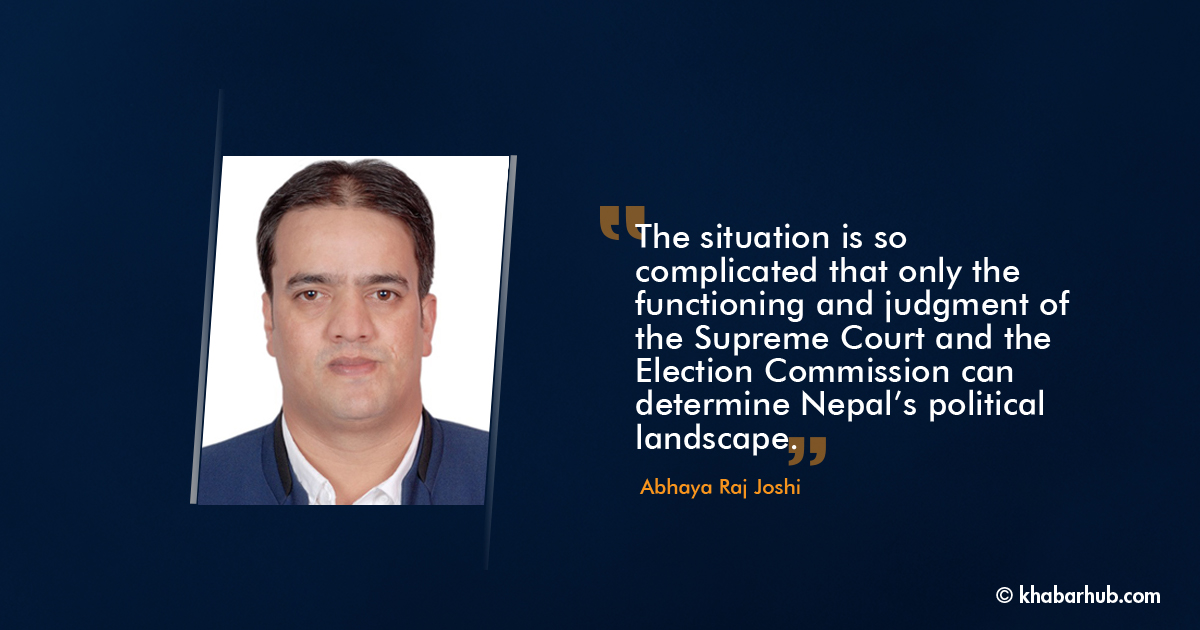 Nepal’s prime minister K P Sharma Oli has had abruptly dissolved the House of Representatives on December 21st setting the stage for fresh elections in May 2021.

The President has approved the dissolution without any dismay, a clear reflection of the President and the prime minister in cahoots.

Such an act by the president to praise the prime minister, without seeking wider political consultation, is unbecoming of the high office.

There is no doubt that the prime minister has the intent to create an atmosphere for confrontation as we observe the growing political fraction within the ruling Nepal Communist Party (NCP) similar to horse-trading, is shameful.

Nepal’s 2015 charter does not give the prime minister the prerogative to dissolve the parliament without exhausting alternatives.

Maintaining the law and order is the prime responsibility of the Nepal police. If somehow, the situation goes beyond their control then only Armed Police Force (APF) should be mobilized.

Nevertheless, the prime minister claims that he has the absolute right for what he has done upholding implied powers, but in truth, his action is against the expressed powers stated in the Constitution of Nepal, 2015.

It is like the bad carpenter calling for tools to blame. However, now the situation is so complicated that only the functioning and judgment of the Supreme Court and the Election Commission can determine Nepal’s political landscape.

From the security lenses, starting the day the House of Representatives is dissolved to the Elections Days (if happen) the cost to be incurred for the deployment of the security forces will be a huge financial burden for the country, especially at the time when country’s economy is devasted by the COVID-19 pandemic.

The recent surge in indecency reflected in the blame game and hate speech from political leaders on opposite sides are to be blamed for rising internal security challenges in the country.

We are observing thousands of opponents in the streets to oppose the move by the prime minister. On the other hand, Biplav-led outfit is using the Maoist-era playbook to sow chaos given the plot created by the political mess.

I am afraid that if somehow a person gets killed in a confrontation, the situation will go beyond anyone’s control. Therefore, there is a need for the Nepal Police, which is the first responder for any mishaps, made professionally sound.

This is a very problematic situation. Therefore, the time has come for the security forces to be given professional run.

Despite their regular duties Nepal police personnel are also overloaded handling different security challenges caused by COVID-19 and lockdown, but the current political tensions have added further (unnecessary) responsibilities on their shoulders.

The condition is so frustrating for many, not only because they are less equipped and incentivized, but also because they face a dilemma on how far they can use force in handling the situation, as fractions are depending within the ruling party.

Maintaining the law and order is the prime responsibility of the Nepal police. If somehow, the situation goes beyond their control then only Armed Police Force (APF) should be mobilized.

This is troublesome and should be corrected as early as possible by the heads of these security institutions. On the other side, both of these security forces are being managed and mobilized by the Chief District Officers (CDOs) who are untrained and lack any proper knowledge on the deployment of security organs.

This also should be corrected, sooner the better. In fact, at present, there seems lack of any clear provision or framework for the deployment of security forces.

It will be in everyone’s benefit to building consensus even among differences, and a big obligation lies within the prime minister and the President to protect people’s political rights as well as safeguard the essence of the constitution.

This is a very problematic situation. Therefore, the time has come for the security forces to be given professional run.

Nepal, at present, is in a very fragile stage which could encounter several challenges, if not checked on time. I am amazed to see why people are in a state of silence and indifferent to such a political crisis at present.

The prime minister can’t take the executive power as the superpower bestowed on him. This is unconstitutional, irresponsible, and illogical.

We as a nation can’t opt for a damaging step, the situation of confrontation is in no one’s good. We couldn’t afford to repeat the painful past being reflected by our elected leaders time and again.

Moreover, an intraparty dispute should not make the whole country hostage of indecision creating an atmosphere of confrontation.

In Conclusion: As only the judiciary stands between the road to authoritarianism and democracy. It is up to the Supreme Court to establish the good precedence by assuming a counter-majoritarian role to safeguard the constitution and clearly illustrate a way forward.

I also believe that there are not many options left for the judiciary other than to make a rightful judgment to establish the check and balance to overturn the unconstitutional exercise of the executive.

It will be in everyone’s benefit to building consensus even among differences, and a big obligation lies within the prime minister and the President to protect people’s political rights as well as safeguard the essence of the constitution.

(Joshi is the Chairperson of Nepal Centre for Security Governance (NCSG), Kathmandu Based Think Tank)